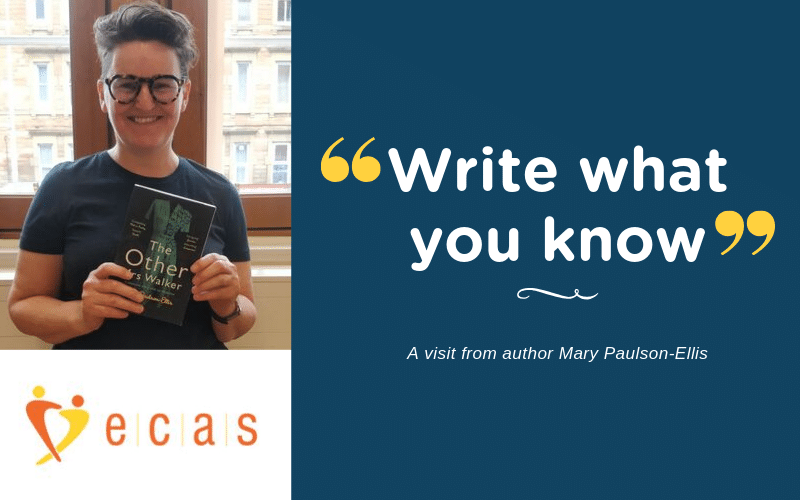 One of the most pressing concerns for any writer is the question of inspiration. Where does it come from, and how do you transform that initial idea into something captivating? At the Ecas Reading and Creative Writing group, I am frequently uplifted by the range and quality of material generated by simple prompts to the imagination: write about a place that is important; describe an unusual encounter between you and another person.

Equally fascinating are members’ responses to particular published writers – the way in which events in novels bring back personal memories, or how specific words and phrases can light the fuse for a wildly imaginative piece of prose or poetry. Reading is one of the most effective means of inspiring writing, and the more that you read, the wider your vocabulary becomes. Close analysis, and the subsequent understanding and implementation of a published writer’s style and technique, is one of the best ways of improving your own work.

Even better, though, to be able to ask the author about their writing, and how it comes into the world. Step forward the Scottish Book Trust and its brilliant Live Literature programme, which helps to bring authors into the community by part-funding around 1,200 events every year. Through this scheme, Edinburgh author Mary Paulson-Ellis visited Ecas on 4 July this year to talk about her debut novel – The Other Mrs Walker, a Times bestseller and Waterstones Scottish Book of the Year 2017 – and all things writerly.

Paulson-Ellis arrived armed with a suitcase of props – apostle spoons, laburnum seeds, family photographs, coronation coins, and a fox stole – her personal possessions that all feature in The Other Mrs Walker, and which are an embodiment of the oft-cited mantra, ‘write what you know’. As she told us: ‘When objects pass on, they lose one story and gain another’, an idea that acquires an extra dimension when you consider that her own family heirlooms have found an alternative existence in her fictional creation. In essence, she added, ‘the objects are the thread that connects the narrative’ of her novel.

In response to the question of inspiration, Paulson-Ellis remarked that ‘writing comes from within you – it is informed by your experiences.’ The fact that she has lived in Edinburgh for thirty years and previously worked as a tour guide undoubtedly contributes to her richly descriptive narrative set among the mortuaries and crematoriums of Scotland’s capital city. She admits that she likes to write about ‘what I call the “murderous” side of family life – the dark, the quirky and the strange’. As she pointed out: ‘You scratch the surface of any family and you find material.’

The original spark for anything from a short poem to a full-length novel can sometimes be traced to a particular moment. In Paulson-Ellis’s case, it was a TV programme she watched around 20 years ago about an old lady who dies alone in a flat; as she told us, ‘certain things stick in your mind’, although you shouldn’t necessarily bank on the end product resembling your initial thought. She originally imagined that The Other Mrs Walker would be a ghost story, but instead she produced an inventive family mystery that switches between the past and the present, and between two locations, Edinburgh and London. When we read the novel in preparation for her visit, we were particularly intrigued by Paulson-Ellis’s references to what she calls the ‘Edinburgh Way’. She explained to us that Edinburgh is ‘a big city with small interconnections’ where ‘things can get done by a simple word in the right ear. At times it feels like a village where everybody knows everybody else.’

At the end of our session – a highly entertaining and informative couple of hours in which we also heard excerpts from Paulson-Ellis’s new novel The Inheritance of Solomon Farthing – we felt we knew quite a bit more about an intriguing writer. Behind the eye-catching headline of a two-book deal with a leading publisher lies a story of a lot of hard work: many months of solid writing, which incorporated ‘a spreadsheet to keep track of all the different objects and time periods in the book.’ And the net result? ‘It meant I could pay my gas bill.’ Well, no one said a writer’s life was all glamour, did they?