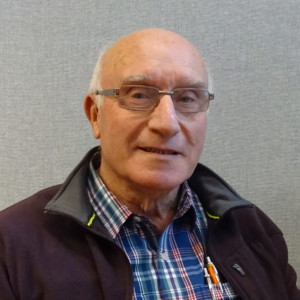 John left school at the age of 14 and become an apprentice joiner: 65+ years later and he is a very valuable member of our Board.

His varied and extensive career led him to the army, first as part of National Service and then as a regular soldier; all while serving as a piper in the Scots Guards and travelling the world to perform with his trusted bagpipes. From there, John went on to join the Edinburgh City Police Force and later the Lothian & Borders Police where his 32 years of service saw him rise up the ranks to Inspector, specialising in the licensing of firearms and explosives.

Eventually retiring after becoming injured whilst in the line of duty, John used the newly acquired free time as a piping tutor at local schools before coming across Ecas in 2000 to attend our Art activity, which he still attends today.

What clients say about Ecas

We feel confident now and realise we can do things we couldn’t do before but we can do them now!

Thank you Ecas for supporting us to go on a holiday. The cottage has been great: wheelchair accessible with amazing views around.

(My befriender) brings the outside world in.

The group is a fantastic way to come together and talk about things: books; our lives; what’s important to us.

Ecas: a good place to be.